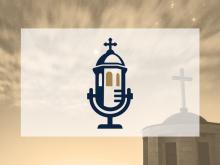 What makes a man great?

Fr. Vijay explores what separates the Apostles of Jesus Christ from others.  It is a special message directed to all men but important for all.

33 When they heard this, they were enraged and wanted to kill them. 34 But a Pharisee in the council named Gamaliel, a teacher of the law, respected by all the people, stood up and ordered the men to be put outside for a short time. 35 Then he said to them, “Fellow Israelites,[a]consider carefully what you propose to do to these men. 36 For some time ago Theudas rose up, claiming to be somebody, and a number of men, about four hundred, joined him; but he was killed, and all who followed him were dispersed and disappeared. 37 After him Judas the Galilean rose up at the time of the census and got people to follow him; he also perished, and all who followed him were scattered. 38 So in the present case, I tell you, keep away from these men and let them alone; because if this plan or this undertaking is of human origin, it will fail; 39 but if it is of God, you will not be able to overthrow them—in that case you may even be found fighting against God!”

They were convinced by him, 40 and when they had called in the apostles, they had them flogged. Then they ordered them not to speak in the name of Jesus, and let them go.